Trailer for Switched at Birth 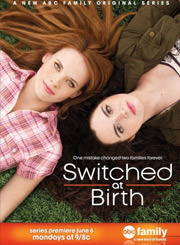 Bay Kennish is a teenager who grew up in a wealthy family with two parents and a brother. Fellow teen Daphne Vasquez, who lost her hearing at an early age, was raised by a single mother in a working-class neighborhood. One day in her high-school chemistry class, Bay discovers that her blood type doesn't match either of her parents'. Official tests confirm that Bay is not her parents' birth child. When the Kennish family meets Daphne and her mom, Regina, they realize that the girls were switched at birth. Upon making the realization, the Kennishes allow Regina (who is experiencing financial difficulties), Daphne and Daphne's grandmother to live in their guest house. The two families, who are polar opposites, struggle to learn how to live together for the sake of the girls as the girls struggle to keep their footing in both the world they know and the new one into which they are thrown.
© Smart Post Sound, Inc. 2020 (All rights reserved)