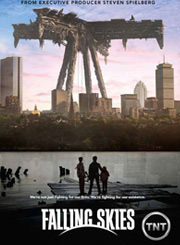 In the wake of an alien attack that has crippled most of the world, shock has turned to resolve as the survivors gather to fight back. Leading the charge is Boston history professor Tom Mason, whose wife was killed in the attack, and one of his three sons is among a group of captive teens. Desperate to rescue his son, Tom joins forces with the 2nd Massachusetts, a makeshift regiment assigned to protect the survivors. As second in command to Weaver, Tom uses his knowledge of military history to gain intelligence about the aliens and form a plan of attack. But the plan keeps changing and more questions surface as the survivors discover what they're really up against: a highly intelligent, heavily armed alien force whose purpose on Earth is the biggest mystery of all.
© Smart Post Sound, Inc. 2020 (All rights reserved)