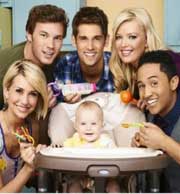 Surprise! You're a father! That's the news bartender Ben receives when he comes home one day to find that an ex-girlfriend has left a baby girl on his doorstep. Naturally, the addition to Ben's family -- or having a family -- turns his life upside down. After all, he's a bachelor in his early 20s who lives in New York, and being a single father doesn't really fit into that lifestyle.


After much deliberation, Ben decides to raise the baby with some help from buddy Tucker, brother Danny and his protective but, at times, overbearing mother, Bonnie. Also in the picture is Ben's close female friend, Riley, who has secretly had a crush on him since childhood. Riley, the formerly overweight girl next door who's now a beautiful young woman in law school, wants the new father to take notice of her, but what she doesn't know is that Danny has a crush on her.