Act Of Valor had a $25 million opening weekend


Trailer for Act of Valor

Act of Valor grossed $25 million in the first four days of release.
It continues to be a big hit at the theaters nationwide. 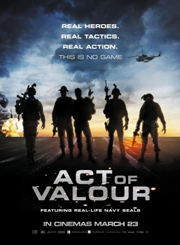 Bandito Brothers has set up another feature project to follow Act of Valor. Mike “Mouse” McCoy, who co-directed that Relativity Media-released drama with Scott Waugh, will direct God’s Gulch, a drama that that Brooks McClaren will write, based on an idea he and McCoy hatched together. Bandito Brothers, the financing/production studio, will fund the film.

The logline: In the wake of the entire computer network shutting down and the ensuing economic and societal collapse, a group must come together to fight for their survival.

This is the second picture that Bandito Brothers has set in the run-up to the release of Act of Valor, the $12 million budget film that topped the box office last weekend with a $25 million opening weekend. Waugh just made a to direct High Speed, a gritty, stylized car chase film that is being written by Greg Russo.  Both of these projects will come after McCoy and Waugh direct Black Sands, the action film that stars Arnold Schwarzenegger and goes into production this summer.

McCoy, co-founder, CEO and Creative Director of Bandito Brothers, is best known as an award winning commercial director whose most recent commercial work includes the re-branding of Hot Wheels. McClaren previously wrote the 2010 Black List script How It Ends, which has Breck Eisner attached to direct and Sierra financing a summer start. God’s Gulch is produced by McCoy, Max Leitman, Jay Pollak and Michael Mailis.

I just want to say that working with Smart Post has been amazing. The level of service, attention to detail, and quality sound work is second to none.
John Doe, Executive Producer